The restaurant at 21 W. Church St., part of Tom Atha’s Thirty-One West development, will have a different look than the Moe’s restaurant in Granville, including sculptures by artist Jason Antol.

Owners Kara Gallagher, her husband Greg Tracey, and her mother Nasie Gallagher, who opened Ohio’s first Moe’s restaurant three years ago in downtown Granville, are anxious to join the revitalization of downtown Newark.

“It’s awesome to be surrounded by all these building owners who have the same goal to have success down here and bring life here to a place we remember as the place to be when we were younger,” Kara Gallagher said. “Tom Atha said we have one chance to save the architecture and history in this town.”

Moe’s joins The Ballroom at Thirty One West, Sage Yoga Studio, Little Arrows Play Cafe and Denison Artspace in Atha’s development on a block of West Church Street that had been mostly vacant. Little Arrows opens in June.

“Thirty One West couldn’t be more excited for the long anticipated opening of Moe’s,” Atha said. “They have worked tirelessly over the past several months. It is inspiring to work with such young, smart and hard working business owners who care so deeply about their home town.

“The interior is truly unique, and I am excited to see a casual family dining experience added to an already great lineup of downtown restaurants.”

Gallagher said she approached Antol with a unique idea for the interior design of the restaurant.

“I wanted to see if he could make me a tree that hung from the ceiling and its branches went throughout the restaurant,” Gallagher said.

The project evolved, with Antol forming metal into trees covering three structural pillars in the restaurant, with branches spreading onto the ceiling. At night, the trees and branches are lit up, creating an unique atmosphere.

“It’s overwhelming, seeing it at night,” Antol said. “It was more than I expected. The most beautiful part of the creative process is the surprises along the way. That’s the best part.”

Antol also created the Thirty One West marquee, and mural and signage at the The Bootlegger Bar at Thirty One West. It’s been a different experience than his normal creations.

“I’ve been primarily a glass artist for 17 years, and I had a shift of perspectives,” Antol said. “The people who had owned my work, I’d never met. As a sculptor, the opportunity to work at this scale really appeals to me. It’s really for the community.”
Moe’s had been scheduled to open in December, then in January, but much of the work took longer than expected, Gallagher said. Most of the 31 West businesses opened in the fall.

“We thought we were going to open last year,” she said. “A lot of things were out of our control. It’s been a long, stressful project, but a great one. We had great help from family and friends.”

Gallagher said he father, Larry Gallagher, did a lot of work. Lori Clark, owner of Art on Elm, in Granville, did the wall paintings. Duane Winchester, of Woodbird by Winchester, in Granville, made five large tables. Wes Myers, of Myers Concrete Countertops, in Newark, did the bar and some table tops.

The restaurant will have a Mini Moe’s area for children, as does the Granville restaurant, an open kitchen and the same menu as in Granville except for some daily specials. In Granville, she said the children enter and immediately run to Mini Moe’s.

“We want to have a family-friendly restaurant, and we want to be the late night, happy hour fun place for adults, too,” Gallagher said. 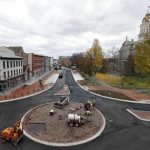 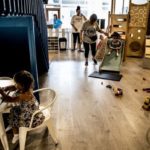