The Marne United Methodist Church project took many months of volunteer work to finish construction on the interior of space at 29 West Church St., accessible from the Newark Arcade.

Little Arrows Play Cafe provides space for parents to take their children while working on a computer in the same room or taking a class in the same building.

It is part of the Thirty One West development, which includes The Ballroom at Thirty One West, Moe’s Original Bar B Que, Sage Yoga Studio, Denison Artspace and loft apartments. Most of the tenants opened their businesses last fall or winter, and Moe’s opened on May 30.

“We anticipated opening in conjunction with Black Friday, but we had construction delays,” Marne United Methodist Church Associate Pastor Dave Warner said. “We just weren’t ready. It’s taken a lot of volunteer work to get it built, but it got us more prepared with the business side of it.

“We’ve dreamed about this for three years, but the way the place looks is about identical to the way I drew it up three years ago.”

Warner said the original idea was to provide a place for single parents to do school work while their children played. The on-duty staff will consist of a volunteer or two.

“We’re not a child-care facility,” Warner said. “Parents need to be on the premises. There’s free Wi-Fi, coffee, snacks. One idea is for mom’s groups to work here, or a bible study while kids play.”

There will be special events, maybe several times a month, when Little Arrows will have a paid staff available, allowing parents to leave their children while they attend a yoga class or watch a performance at The Ballroom at Thirty One West.

Little Arrows will provide child care for parents attending the performance of Mo Pitney with Bryan Lewis, on July 21, at a cost of $20 for the first child, and $15 for the second child.

Warner said they hope to eventually have contracts worked out for other coming events at Thirty One West. 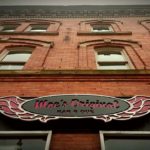