For Alex Athan, his new downtown Newark restaurant is like coming home.

Athan and his business partner Stan Riley opened Barrel and Boar at 5 N. Third St. on Tuesday, just around the corner from where Athan’s old family-owned restaurant, The Natoma, was located for 88 years before it closed in 2010.

He said he never envisioned coming back downtown, but when the right opportunity came to bring the business to Newark, he took the chance.

“All the dominoes fell in the right place,” Athan said.

Athan, of Granville, and Riley co-own Barrel and Boar, which was founded in 1983 as Yoho’s Catering. The business was purchased by Riley and rebranded as Holy Smoke BBQ.

Riley opened a space in the North Market in downtown Columbus and then a restaurant on Hamilton Road in Gahanna several years later. The business was rebranded as Barrel and Boar when it began to evolve from a fast-casual eatery to a full service restaurant and bar, Athan said.

Athan and Riley considered locations in Lancaster and Columbus when they were looking to expand the business last year, but they fell in love with the Newark space and the revitalization that’s happening.

“We like the direction downtown Newark is headed in,” he said.

Athan said Barrel and Boar puts its own twist on barbecue. Customers can get a traditional rack of ribs or a pulled pork sandwhich, but Athan said the restaurant has expanded on those options for some of its specialty sandwiches.

One option is the Texas Cheese Steak, which is the restaurant’s version of a Philly cheesesteak that includes shaved brisket, cheddar cheese, grilled onions and peppers.

Barrel and Boar gets almost all of its products from Ohio. All 12 of the taps feature beers brewed in Ohio, three of which are from Licking County breweries: Homestead Beer Co., Buckeye Lake Brewery and Buck’s Brewing Co.

“We want to support other businesses that really in turn support us,” Athan said. “We take a lot of pride in serving both Ohio-raised food and Ohio signature cocktails and beers.”

Athan said they’ve put their own spin on the space, which has been home to the Garlic Rose, Sharona’s, Dal Cielo and The Manna in recent years. They removed the plaster that covered most of the walls, which now show exposed brick; built a bar; and added booths along the sides.

“Everybody that’s been in the space so far raves about it,” Athan said.

Although the location has housed other restaurants that have failed, Athan said he’s confident their simplistic business model will succeed. He’s also not afraid of the construction that will come to North Third Street in coming months as part of the downtown construction project, which currently has South Third Street torn up and businesses on the south end of the square struggling.

“We’re going to get as creative as possible to weather that storm,” he said. “We’re prepared for it.” 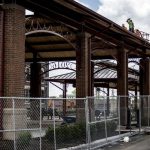 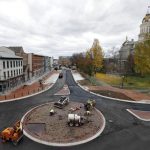