NEWARK – The first roundabout opened in Newark on Wednesday, marking the end of the second phase of the downtown utility improvement project.

Located at South Park Place and South Second Street, it is first of four roundabouts to be installed around the Courthouse Square as part of the $19.9 million project to upgrade downtown’s water and gas utilities.

Newark Mayor Jeff Hall said the effort has been a long time coming for downtown.

City and county officials were in attendance for the opening, including Commissioner Tim Bubb, who said the roundabout looks great and that the whole project will be a vast improvement to the downtown look.

Hall said the city will benefit from the project not only with improved streets, but by proactively addressing storm and waste water pipes.

“These are some of the oldest waste water, storm water lines in the city, so when they do collapse … you can imagine, they leave a void, everything goes in with it,” he said, adding that the project keeps the city from wasting money making minor repairs when problems arise.

The city replaces pipes and utilities yearly, and knowing that downtown was going to be a challenging project, the city looked to see what else could be gained from addressing the water pipeline systems, Hall said.

In addition to separating storm and waste water lines, the project aims to improve pedestrian traffic in the downtown area and help slow down traffic.

“That was one of the top things the businesses told (the city) about, pedestrian safety when they come downtown,” Hall said.

The newly installed sidewalks are broader. Crosswalks next to the roundabout are split in the middle by lane dividers so pedestrians have a place to stop halfway, Hall said.

“This new model will keep drivers’ heads looking down, not looking up for traffic lights,” he said.

The intersection of South Park Place and South Second Street isn’t completely finished. Plants and greenspaces will be planted in the spring when the weather allows it again.

In addition, there are newly installed bioswales that will help catch and retain storm water.

“This town didn’t have any kind of storm water control,” Hall said. “Now, environmentalists, and the (Environmental Protection Agency), are saying to hold onto that water, don’t make it a desert out there.”

The water will go into the planters and sit in the basins, then excess water will be dispersed back out through the storm system, Hall said.

67th Annual Lighting of the Courthouse 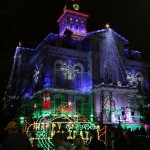 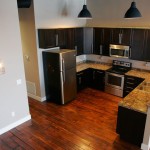